It's Just Words
by Monica A. Frank, PhD 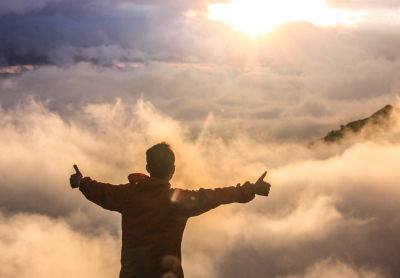 What is the difference? Why do we react differently to the same words just because they come from someone else? The reason is that we don't always know the other person's intention. We don't know if they generally think of us as competent and capable and are just referring to one event. Or, if they actually consider us stupid at least with that particular circumstance.

My husband, who doesn't have a socially anxious bone in his body, doesn't understand why people can be so offended by his words. “I don't mean it that way,” he says, “I was just trying to be helpful.” He tends to be blunt when giving advice and others (including me) frequently take it as criticism: “You should do this—that won't work.” But other people don't know the spirit in which he says something—they just hear the words and interpret them based on their own personality characteristics. If they tend to be insecure they will interpret the words as demeaning or hurtful.

It is important to remind ourselves that sometimes "it's just words."

This is often the problem with the concept of micro-aggressions (subtle and unintentional comments or behavior that can be insulting to others). Each of us is formed by our own personal and cultural perspectives. People who are secure and comfortable in themselves and who wouldn't care if someone made such a statement about them often aren't aware of the impact their words have on others.

Wouldn't it good if people could take others' perspectives? Shouldn't we teach people to do so? That would be great but it is not always possible. For instance, even though as an adult who has come to terms with myself certain words can trigger past insecurities and my first instinct is to become defensive. Although I challenge this with self-talk and remind myself they are “just words” I still have the emotional reaction. It may not have a great impact on me because I'm aware of it but I still experience it.

So is it realistic to think that we can eliminate micro-aggressions? No, because by their very nature they are unintentional and the perpetrator has little insight into the behavior. Sure, we can tell people to stop using certain words because that is very specific but we can't stop every potential offense.

This is especially true because what could be okay to some could be offensive to others. A word or phrase that could trigger an emotional reaction in me may not even be noticed by someone else. Or, for example, if you study different cultures and hand gestures, some common gestures in one culture could be offensive in another. Consider the thumbs up gesture commonly used in the U.S.--it can be quite offensive in some cultures (look up the meaning—I can't think of a way to describe it politely).

Therefore, the best approach is communication. If someone does or says something to you that is bothersome, let them know: “I don't think you intend to be offensive, but that bothers me.”

Of course, someone may become defensive and attack: “I didn't mean anything—you're just sensitive.”

“Well, I'm letting you know it bothers me and if you continue then I will have to believe you do mean it.”

However, it is also important to accept that when someone is not referring to you specifically that they can't possibly tailor their speech so that no one will be offended. We need to check our emotional reactions and counter them with self-talk so that we don't escalate situations that are not meant to be hurtful. If you read my article Why Are People Mean? Don't Take It Personally you can see there are many situations that are not meant to be mean but are unintentional.