Why You Get Anxious When You Don't Want To
by Monica A. Frank, Ph.D.

Have you ever felt anxiety symptoms even when you really weren't fearful of something? Your heart started pounding for no reason?
Tweet 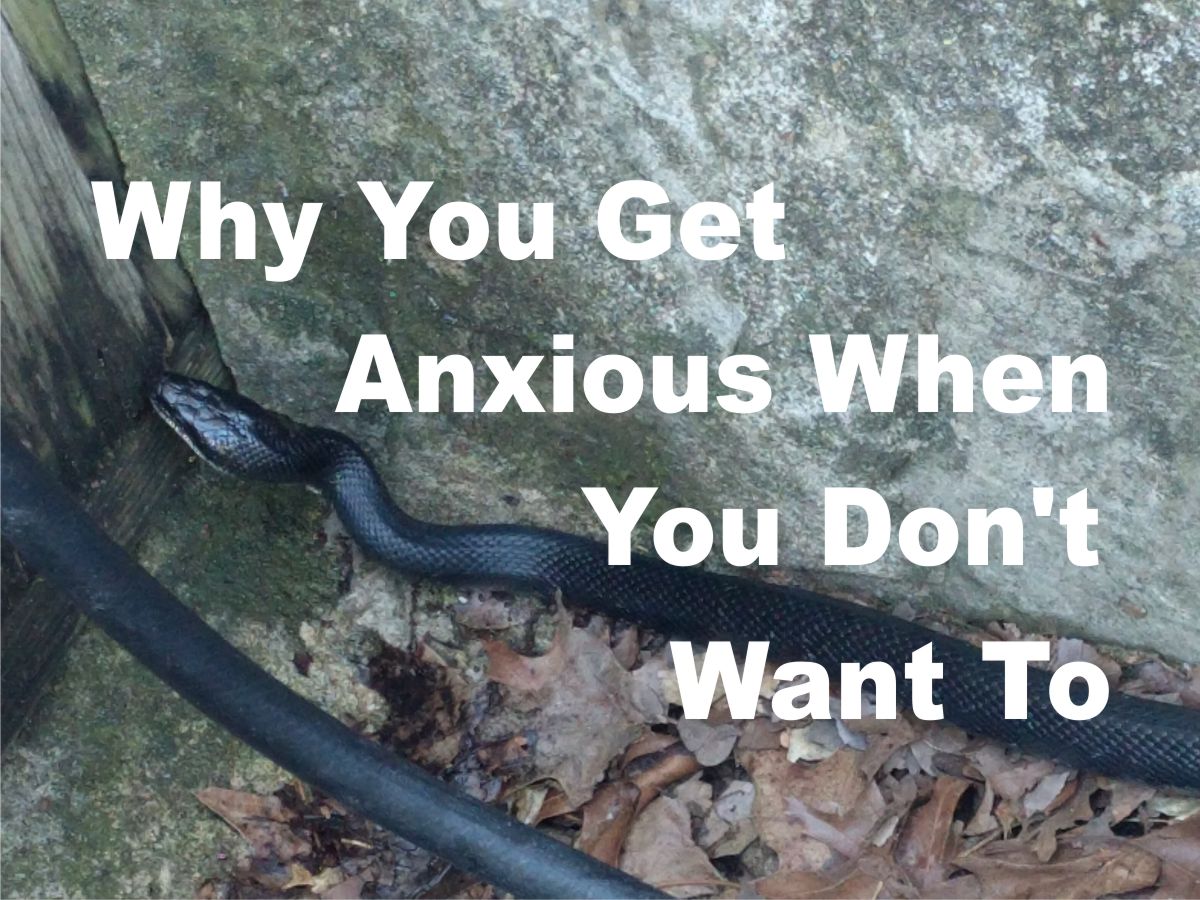 If you have anxiety problems you have likely experienced anxiety even when you knew there was no rational reason for the anxiety. Perhaps you weren't even truly afraid. Yet, your heart still started pounding and your breathing became more rapid. Or, you felt tension build up in your shoulders. You might ask "Why am I reacting when there's nothing to be afraid of?"

For a couple of years after I had completed graduate school I still had a stress reaction whenever I drove past the campus. Even though I knew I didn't need to be anxious or stressed, I still reacted automatically. Graduate school had been pretty stressful. We used to joke, “If you can survive this, you can be a psychologist!” So, during graduate school my body was in a chronic survival mode and had become conditioned upon seeing the campus to be stressed. Why did this continue to occur after graduation even though I knew there was no reason to be stressed any longer?

The development of a conditioned response

In 1920 John Watson and Rosalie Rayner published a study about creating a phobia in an infant. The procedure (which would be considered unethical by today's standards) involved making a loud noise behind the infant to cause a startle reaction every time he tried to touch a white rat. Although initially unafraid of the rat, after several pairings of the noise and the rat “Little Albert” began to cry and crawl away every time the rat was presented to him. In addition, the phobia generalized so that he became fearful of other types of white fuzzy objects.

Typically, we think of fear as an emotion based on irrational thoughts in reaction to a situation. However, fear can be a biologically conditioned response. For instance, when Little Albert was startled by the loud noise, the stress hormone cortisol was released by his system. Similarly, my stress reaction had been conditioned by the chronic stress of graduate school so that the sensory input of seeing the campus triggered the biological stress reaction in me years later.

The “flight or fight” response to threat involves a number of physical processes and reactions including the release of cortisol, increased heart rate and blood pressure, rapid breathing, sweating, constriction of the blood vessels and dilation of the pupils. The initial response is for the body to prepare the immune system to fight any foreign substances that could attack the system if physically injured. Cortisol is released to increase energy, to quiet the immune response, and to shut down any unnecessary physical processes such as digestion.

Such a response prepares a person to deal with the threat that has been encountered. However, our brains don't distinguish between a real-world threat and an imagined threat. As a result our bodies respond in the same way if a dog is attacking or if we are giving a public speech or if we are remembering an event. Repeated encounters with the threatening event causes the brain to become conditioned and automatically release cortisol whenever the event or even the memory of the event occurs. Thus, even a memory of a fearful situation can release cortisol into the system and cause the cascade of physical symptoms.

For the biological process to initiate, the brain must first view the event as a threat. Cognitive restructuring changes the thinking about the situation so a person can learn to regard it as non-threatening. For instance, if a person is afraid of public speaking, education can help change the thinking. Learning that most other people feel the same, that making mistakes during speeches is normal and other people are likely to feel sympathetic, and that embarrassment isn't life-threatening but just a momentary discomfort can help the person reappraise the situation.

The unfortunate part of this process for those with anxiety is that the fear response can occur without direction from the thinking part of the brain. Even when a person recognizes the fear is excessive and is willing to face the feared situation, the automatic biological process may still occur if the fear has already been established. For example, the person has tried to speak in public previously but each time was over-whelmed by the physical symptoms (rapid heart beat, trouble breathing, sweating) and couldn't continue. If such is the case, the person needs assistance with controlling the biological response.

Read more: How Do We Change Irrational Thinking?

Why relaxation combined with exposure to the feared situation works

To prevent the automatic release of cortisol that triggers the cascade of biological events and symptoms it is necessary to retrain the brain at a biological level. Gradual desensitization is an exposure method in which the person confronts the feared situation little by little while in a relaxed state. By maintaining relaxation, cortisol is not released into the system (or is released in a more controlled fashion) so that the automatic fear response can be reversed.

However, it is important to do such exposures in a controlled manner because if done incorrectly it can lead to strengthening the fear response. For example, I once had a client who experienced panic attacks in a mall because he felt too far away from the safety of his vehicle. He did very well with controlled systematic exposures. But unfortunately, too well. He became so excited about being able to be in the mall without panic that he went in further than we had planned and immediately had a panic attack which set him back in his treatment.

In depth: How the stress hormone cortisol is involved in the development of fear-based memories

When a person is confronted by a threatening situation, physical readiness and energy is required to run away from or to fight the danger. Even in the case of non-physically threatening events energy is needed to deal with the situation. To increase energy the brain increases the blood glucose and suppresses unnecessary systems of the body such as digestion which is not required during a confrontation. Suppressing these systems allows the energy to be available to the organ systems required to manage the threat. For instance, heart rate and respiration is increased and the muscular system is prepared so the body can react quickly.

The first step in this process is the amygdala receives sensory input (sights, sounds, smells, etc) from the outside world and initiates what we experience as the startle response to danger. This sensory information may bypass the cortex (which evaluates threat) and instead causes an automatic reaction. The amygdala is located in the limbic system of the brain and directs the sympathetic division of the autonomic nervous system to increase physical readiness (breathing, heart rate, etc). Shortly afterward cortisol is released which increases the glucose for energy and suppresses the non-vital organ systems so that energy is not used unnecessarily. The individual experiences these physical changes as excitement, anxiety, or fear and may report discomfort from the physical changes such as stomach upset because the digestive process was interrupted.

Athough cortisol is involved in reducing the inflammatory symptoms, in the case of a chronic (ongoing) stress reaction, the failure of cortisol can cause a pro-inflammatory effect. From the body/brain's point of view, inflammation is a beneficial process that helps to fight foreign invaders. However, chronic inflammation can become a problem in itself as it can increase the experience of pain and/or discomfort throughout the system. As a result, this process can condition fear-based memories.

For example, if a person is shocked (pain stimulus) every time an image of a harmless black snake appears on a screen, eventually the person's body will automatically react as if that image is a threat even when no shock occurs. The initial shocks cause the release of cortisol because the body is being threatened and the fear-based memory of the shock is created by the pairing of the image with the shock. In this way, the body reacts to the image automatically even if the person knows a shock will not occur. Not only that but generalization will occur as the brain triggers a reaction to anything that is similar such as a black hose.

The result of fear-based memories is that a person reacts even when they are aware that no danger is present. Counter-acting this process has to involve re-conditioning the biological system to not react. Thus, cognitive-behavioral therapy can be an effective method to change this reaction.

Read more: A Brief Primer on the Biology of Stress and How CBT Can Help