Catastrophe? Or, Inconvenience?
by Monica A. Frank, Ph.D.

January 2021 update: Once again I hear those in the media making catastrophic pronouncements by referring to the past year as the "worst year ever." I acknowledge it has been a very difficult year for many people but we need to keep perspective. 2020 has been catastrophic to some people. However, if you are still able to feed and house your family and haven't experienced tragic deaths, 2020 has been an inconvenience. For the most part, we have had to make adjustments to our lives that are inconveniences but not catastrophes. A catastrophe is a tragic event of extreme misfortune that is beyond our ability to cope. But not only have we been able to cope but people have developed creative solutions to problems, many have rediscovered what is important in life, children have learned to confront adversity, and we've all learned more about developing psychological flexibility to cope with the many changes.

Be a critical thinker and evaluate what you hear and how you will allow it to influence you. 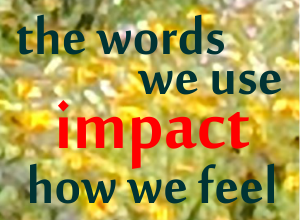 Listening to the weather forecast one frigid day, I realized how much we are influenced by the catastrophic thinking of the media. The weatherman reported, "The weather has brought more misery to the St. Louis area." Certainly, the weather was causing problems that day. An ice storm caused car doors and locks to be frozen so that people had a great deal of trouble getting into their cars. However, I thought, unless someone was in the middle of nowhere with no cell phone and they were unable to open their car door because of the ice, this was not "misery." Instead, I would call it an "inconvenience." Most of us walked out to our cars to find that we couldn't open the door, went back inside a warm house or office, and found some solution to our problem.

As a cognitive therapist I am well aware of the influence our thinking has upon moods and behavior. Yet, I became fascinated with how much we are inundated by negative messages that can seriously affect how we perceive a situation and how we feel. Many people may believe that I might be overstating the consequences of such a simple word as "misery." However, try a simple experiment for yourself. The next time it is raining, tell your colleagues or family "It's just miserable and dreary out" and watch their reactions. Do they tend to respond with a negative comment? Especially pay attention to their nonverbals: do they appear happy? do they appear alert? do they commiserate with a frown? do their shoulders sag? do they sigh? Then try telling others "I find listening to the sound of the rain so relaxing." Is there a difference in the nonverbals? Are they more likely to respond with pleasant conversation?

Such a simple and fairly insignificant example. Yet, if you find that people respond differently in these two conditions, imagine this response multiplied by all the daily influences in our lives: other people, television, internet, newspapers, radio. In fact, don't just imagine but pay attention to the words that are used by the media. Take a news article and highlight the emotionally influential words. Listen to a talk show and write down the times they make negative comments. How do you feel when you listen to a show with many negative words and comments? Do you feel more angry or burdened? Or do you feel refreshed or energized?

Why these messages impact us

So why is this a serious problem? Because of the psychological concept "self-fulfilling prophecy." A self-fulfilling prophecy refers to a belief that creates an outcome. For example, if an individual is walking into a social gathering and thinks "I have so much trouble talking to people. I'm probably going to end up sitting by myself," he is likely to have exactly the outcome predicted. The negative thought and prediction causes the person to project certain nonverbal messages such as not smiling or lacking eye contact with others which tends to make him less approachable. In addition, he may be less likely to initiate contact because of the belief. And therefore, the prediction comes true and he sits in a corner by himself.

On the other hand, a self-fulfilling prophecy can also have a positive prediction. For example, let's say the person thinks "I have so much trouble talking to people. But I know I can introduce myself and smile and listen to others well. So I'll be able join a group and not sit by myself." This person is much more likely to have the positive outcome predicted.

Many years ago I treated a woman with severe Social Phobia. Terrified to be around others, she did her grocery shopping in the middle of the night and never interacted with others unless it was unavoidable. As she made progress in therapy, one day she reported excitedly "Someone asked me for directions at the mall." At first I was confused by this innocuous situation. However, she explained "Even when I was out in public in the past, no one ever approached me or smiled at me." Her previous self-fulfilling prophecy that no one could possibly like her had changed to the belief that she was a likeable person. As a result, her nonverbals had changed and other people could now approach her. This led to her being able to make friends, take classes, and get promoted to a supervisory position at work.

Therefore, my proposition is that the words we use can have quite an impact upon how we feel about a situation. If we look at a situation as an inconvenience rather than a catastrophe we will approach it differently and not feel as overwhelmed. One day a couple years ago just as I finished a session with my last client of the day in which we discussed this very topic and walked out to my car I noticed I had a flat tire. I said to myself, "This is an opportunity to practice what you preach. A flat tire is really just an inconvenience." However, I was supposed to teach a cardio kickboxing class that evening and I probably wasn't going to make it. So, I called AAA to fix my tire and another cardio teacher to handle my class continuing to remind myself that this is just an inconvenience. Prior to the truck from AAA arriving I received a call about someone I knew personally who was making suicidal threats and I needed to assist. Throughout all this I remained calm and handled both situations. Later, I recognized that by not responding as if it was a catastrophe that a friend was suicidal while my car was broke down, I was less stressed by the situation and was better able to assist.

Now, I'm certainly not saying that nothing is catastrophic. However, we need to be careful how many events we tend to classify in that category. I think in general we over-classify events as catastrophes. Most situations are not catastrophes and we need to keep perspective. For instance, one time when I was viewing things in my life more negatively, my husband looked up from the paper and said, "Here's an article about some folks in Ethiopia who were crossing the country on foot to get to another country for food and they were eaten by lions." That immediately put things in perspective for me because that was a true catastrophe.

A client I had who was dying of cancer once said to me, "If a problem can be solved by throwing money at it, it's not really a problem." She meant that even if you didn't have the money, it was still a solvable problem. Whereas, it didn't matter how much money she threw at the cancer, it was unsolvable. She was going to die no matter what.

Is anything a catastrophe?

Yet, in a philosophical sense, we could take this premise even further and question whether death is even a catastrophe. Suffering and death are normal parts of life just as joy and happiness are. I'm not saying we should embrace suffering and look forward to death, but I am saying that we can choose to focus on the joy and happiness in life by not making inconveniences into catastrophes.

Since I wrote the above article and 2009 is drawing to a close, I've had numerous clients echoing a common theme "I'm glad this decade is almost over." Usually, when a number of people are voicing something similar and negative, it can be traced back to the media. Sure enough, one of my clients told me that he heard a media personality declare the decade ending in 2009 (which technically isn't true until the end of 2010) as "The decade from hell." Once I started paying attention, I've heard numerous other examples in the media describing this decade in pejorative terms.

What a good example with which to make my point about the influence of words upon how we feel. How many of you have heard these types of comments and then readily agreed? And as a result tended to feel more sad, frustrated, irritated? Do you want to turn control of your life over to this type of influence? If not, make a resolution to refuse to allow the media to dictate how you think and feel. Be a critical thinker and evaluate what you hear and how you will allow it to influence you. Because unless Armageddon occurred while I wasn't looking, I don't know how the last ten years could be labeled "The decade from hell."

Copyright © 2009 by Excel At Life, LLC.
Permission to reprint this article for non-commercial use is granted if it includes this entire copyright and an active link.