People often are surprised when they feel grief at the death of an abusive spouse or parent. "Shouldn't I feel satisfied or relief?” they often ask. 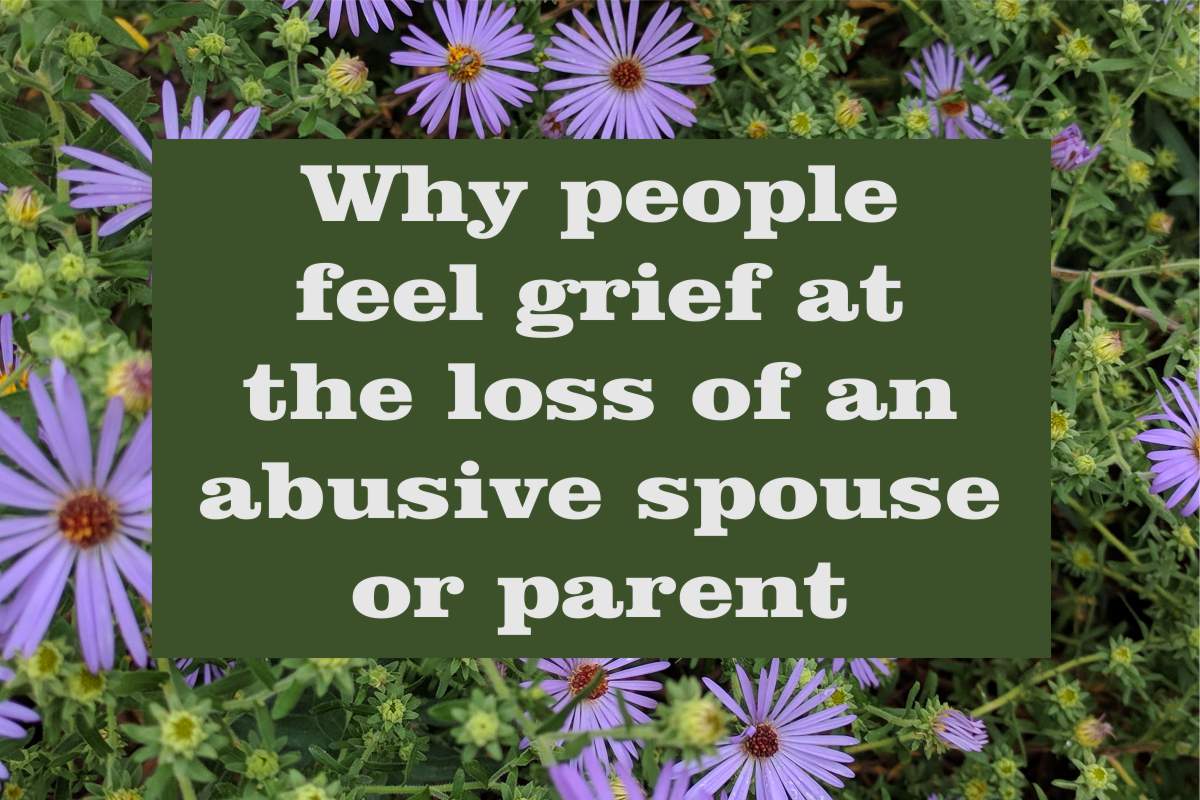 People often are surprised when they feel grief at the death of an abusive spouse or parent. “Shouldn't I feel satisfied or relief?” they often ask. Actually, due to the complexity of emotions associated with grief they usually do feel a mix of emotions including relief. But they frequently feel blindsided by the intense sadness of grief when the person who is gone caused them so much pain.

Grief is due to loss. People understand physical loss in the sense that the person is no longer there. Yet, loss is more than the physical absence of someone. Psychological loss can be even worse. In fact, even when a much beloved person dies most of the loss we feel is psychological. Some is physical such as the loss of physical contact but much of it is psychological. That doesn't mean it is imaginary but that it concerns intangible aspects of loss such as loss of support.

When an abuser dies or leaves the psychological loss can feel even more confusing. Frequently, they don't get support for their grief because people see them as better off: “My friends are so happy I left him, but I just cry all the time.” However, as with all grief, it is crucial to process it which means to feel it and understand it fully so that true acceptance can lead to peace and a greater awareness of oneself.

Psychological losses when an abuser dies or leaves

1) Loss of what could have been. When people choose to be in a relationship, they don't choose it with the anticipation of being abused. No, abuse is the farthest thing from their minds. Instead, they have hopes and desires for a future with someone. When that person dies or leaves they feel the loss of all those shattered dreams.

In the case of an abusive parent, children often grow up wishing for parents like other children seem to have. Or, they are desperately seeking the approval of the abusive parent. Either way, once that parent dies they feel the loss of what they never had but wanted so badly.

2) Loss of an illusion. Sometimes the way people cope with abuse is to ignore it, explain it away, or repress it. I have literally seen the transformation in my office where one week a woman comes in with a black eye, the next week she minimizes it, and a month later she doesn't even remember when I inquire about it. This especially occurs when abuse is a cycle rather than a constant. She holds on to the illusion that everything is good instead of recognizing the pattern of abuse. So at the loss of the abuser she is really grieving the loss of the illusion she had created to survive.

The same can occur with parents. Individuals in dysfunctional family systems often describe having a “close” family. Yet, when they describe the family interaction, their depiction is one of control, criticism, and manipulation. So when an abusive parent dies, the grief they experience is the loss of the illusion of the “close” family.

3) Loss of a promise. Frequently, abusers promise to do better. They recognize how they have hurt their loved one. Unfortunately, promises often don't come with behavior changes. The person may try to not be abusive but they don't actively seek out help to change. As a result they return to the abusive behavior especially when under stress. When that person dies the promise of change is gone too. Another type of a loss of a promise is the breaking of vows and betrayal in a marriage leading to divorce.

4) Loss of time. When an abuser is gone, a person may become acutely aware of how much time was wasted with the relationship. They may have spent years trying to resolve the problems in their marriage or trying to get the approval of an abusive parent while feeling shame or blame for the abuse. With the loss of the abuser they may be confronted with the amount of effort and time they lost trying to change an unchangeable situation. Hopefully, this recognition can lead to an understanding that they couldn't change it because they weren't the cause of it.

5) Loss of the good aspects of the person. Seldom is a person 100% bad or abusive all the time so grief may occur due to the loss of the good parts of the relationship. This type of loss can also be difficult to obtain support from others during the grief because they may not have seen the positive aspects of the relationship. As a result, the person may not be able to share with others the good memories as occurs with normal grief. Instead, they may feel shut down due to comments such as “You are better off now.”

6) Loss of ever being able to understand why the person was so hurtful. I've seen people sit by the bedside caring for the abuser as he or she died while questioning why they did so. I think frequently the reason was the hope that somehow all would be explained to them. Or that the abuser would take responsibility at the last moment and absolve them of feeling guilt or shame. As this rarely occurs, the loss a person feels is not understanding why. This can be very troublesome for abuse survivors as the tendency is to blame the self especially when the abuser faulted them: “I wouldn't need to be so critical if you could think for yourself!”

7) Loss of their hope for the future. I've seen people living their lives with the belief that once the abusive person is gone, their life will be better. However, living life waiting for someone to die or leave is not living. So when the abusive person is out of their life they find that life hasn't magically gotten better. In all that time they never worked on themselves to address the impact of the abuse. Abusive people can have a hold on a person beyond the grave. If the abuse isn't dealt with, the person continues to feel the pain and misery.

8) Loss of the object of anger. Sometimes having a focus for anger helps people cope. Sometimes too well because anger can be protective from the more intense emotions of the grief about the abuse and the person may stay stuck in the anger. When the abuser is gone it may become more difficult for some to remain angry. Without anger to sustain them they may begin to feel the grief of their abuse.

So the loss of the object of the anger leads to feeling the more intense emotional pain associated with the abuse. This grief is more indirectly related to the loss of the abuser because it is more about the losses caused by the abuse itself. However, by addressing it the survivor can come to a resolution of the abuse which allows for living a more satisfying life.

What can be done about these types of psychological losses?

1) Recognition. Sometimes just knowing why you are feeling grief can aid in the grief process. So often people feel there is something wrong with them for feeling so sad or even devastated by the loss especially since those around them don't understand why they are grieving. So knowing that feeling grief at the loss of an abuser is normal can allow them to process the grief and move forward.

2) Challenge inaccurate thinking. Survivors of abuse often feel guilt or shame. With grief they may believe “I didn't do enough” or “if only I had...” The thinking that leads to these feelings needs to be challenged by telling themselves again and again “I am not responsible for how this person treated me.” Although it is normal to feel grief for the reasons described above, the feelings of blame or shame are due to the abuse and need to be dispelled.

3) Feel the grief. Feeling grief is unpleasant and the natural tendency is to avoid it. This is even more true when the loss involves an abuser. However, feeling the grief allows you to resolve it. I have found that writing “grief letters” can be a helpful way to process the grief. These are letters not meant to be sent or shown to others so that you don't censor your emotions. Letters seem to be better for processing than just journaling about the grief because in your mind it feels like you are talking to the person. Such letters can be quite emotional so it is important to have support and guidance when you choose to do this.

4) Therapy. If a person continues to struggle grief therapy should be considered. When support from family and friends can't be obtained, therapy can help process this type of grief. A therapist who has experience with abuse survivors is often best because they are most likely to understand the complexity of the emotions that occur with this type of grief.

Also, recognize when you need help not just for the grief but for how the abuse impacted you. Use the grief to motivate you for change and to address the associated issues such as with anxiety, depression, self-esteem and/or relationship problems.

Copyright © 2018 by Excel At Life, LLC.
Permission to reprint this article for non-commercial use is granted if it includes this entire copyright and an active link.