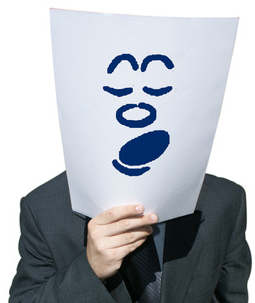 This common belief about non-verbals being the bulk of communication emerged from research by Albert Mehrabian which was about inconsistent messages. His research found that when the non-verbals conflicted with the verbals most people interpreted the communication according to the non-verbals. For example, if someone said “I'm so sorry to hear that” while smiling, the listener is more likely to interpret the message according to the smile.

So, although most communication may not be 90% nonverbal, many times the non-verbals help with understanding a person's true meaning especially if emotions are involved. As a result of the lack of non-verbals in email and blog posts, lol (laughing out loud) emerged to clarify a writer's intentions. Eventually, other descriptors such as emoticons evolved to express emotions on social media. Because writing doesn't have a tone of voice, these methods have become commonly used as a way of providing tone.

All fine and good until we get back to that concept of “inconsistent communication” with which we tend to rely on the non-verbals to help interpret the intent. Passive-aggressive (PA) communication can be one of the more common forms of this type. PA comments in which someone says one thing but means another can be difficult to interpret without non-verbals (sometimes even with non-verbals). To prevent misunderstandings people use internet acronyms like lol and emoticons.

But passive-aggressive people know how to use acronyms and emoticons, too. So, how do you interpret and manage text messages such as “Good to see you again. Looks like you put on a few pounds. lol”? That one might be clear in the interpretation, but how about: “You haven't visited in awhile (smiley face emoticon)”? This text could be a straight-forward communication of fact to invite someone for a visit or, in certain circumstances, it could be a PA accusation.

Often the best way of handling such communication is directly but without an accusation of your own. By responding directly you can avoid interpretations of the message. For instance, “what did you mean by that?” is a direct response to clear up confusion and misunderstandings:

“What did you mean by saying I've 'put on a few pounds'?”

“I was just joking.”

“Is that something to joke about? It felt hurtful.”

“You're being too sensitive.”

“It's a sensitive subject and I don't appreciate it.”

Such a response is a confrontation to the intent of the communication. It forces the PA person to be more responsible for their statements because they know they will be confronted.

Another method is to agree with the statement which often helps you to understand the intent because it forces the other person to clarify:

Not PA response--“Would you like to come by Sunday?” or

PA guilt-inducing response--“You never seem to have the time for me (sad face emoticon).”

At this point you can either ignore the PA message: “No, I haven't had much time lately.”

Or you can confront it: “Are you trying to make me feel bad that I don't have time?”

Keep in mind that normally you don't have to clarify intentions because the communication is consistent. But when it may be PA communication, clarifying forces more direct communication which most PA people try to avoid.

When clarifying, word choice and not making a direct accusation about being PA is important. Otherwise, the PA person wins by either making you feel bad or escalating the conflict to make you the aggressor and the PA person becomes the poor victim.


Mehrabian, A. and Morton W. (1967}. Decoding of Inconsistent Communications. Journal of Personality and Social Psychology, 6, 109-114.

Assertion 101: Don't Apologize for a Request
Assertion 101: Just Say “No”
Do You Understand Me? Conflict in Relationships
When Doctors Don't Listen
Is Your Boss Unfair? What You Can Do About It
“I've Been There” Doesn't Always Mean “I Support You”
Value Your Partner to Reduce Feelings of Rejection During Disagreements
Making an Assertive Complaint
When to Criticize Your Partner
Marital Conflict: When Bad is Good and When It's Bad