Conflict in the Workplace

Making Attributions for a Healthier Attitude

The Effectiveness of Cognitive-Behavioral Treatment for Anxiety Disorders

Co-Dependency: An Issue of Control

The Pillars of the Self-Concept: Self-Esteem and Self-Efficacy

5 Common Microaggressions Against Those With Mental Illness

Does Cognitive-Behavioral Therapy Lack Compassion? It Depends Upon the Therapist

When Needs Come Into Conflict

50 Tools for Panic and Anxiety

I'm Depressed. I'm Overwhelmed. Where Do I Start?

Riding a Horse Across the Plains 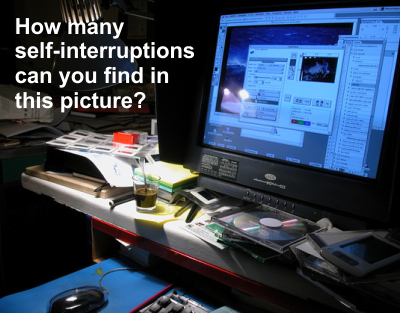 One of the greatest mass delusions of our Type A culture is the so-called benefits of multitasking. As much as people want to believe otherwise, attempts at multitasking does not lead to improved performance or greater success. Instead, the opposite is true. Multitasking is actually a disruption of one task to focus on another and then switching back to the first task. Each time a person switches from one task to another they lose time that could have been used to perform the task. The amount of time can vary from person to person and task to task but the result is the same: performance declines.

One type of multitasking is self-interruptions. Although most people recognize that external interruptions (phone call, knock at the door) can be disruptive to concentration and focus, almost half of interruptions are self-induced. In other words, when a person is involved in a task, they interrupt themselves by checking social media, responding to texts, getting a cup of coffee, etc. Although certain tasks (simple but mental energy consuming) can be performed better when short attention breaks are taken, the performance on complex tasks is likely to decrease with such breaks in attention.

Research shows that the decision to self-interrupt occurs several seconds before stopping one task and focusing on another (Katidioti, et al., 2014). This indicates that if self-interruption causes a performance problem, a person could develop awareness of the decision and choose otherwise. It is not automatic. When you are working and suddenly switch your attention to checking social media it is not an unconscious, automatic decision. You are taking several seconds to consciously make the decision. Therefore, it is a habit that can be changed, if desired.

Try the following to reduce self-interruptions:

1) Mindfully focus on the task. When a thought disruptive to your task occurs, gently refocus back to your task.

2) Assess the interruption. If the thought persists, determine if the interruption is necessary or if it only delays the current task. If it is a delay tactic, allow yourself to gently refocus back to the task.

3) Reward yourself. Plan breaks for appropriate times as a reward. This allows you to be in control of your breaks rather than letting the self-interruptions be automatic.

Mindfulness is Simply Being Without Judgment
Mindful Passion
Mindfulness: What's in a Name?
Mindfulness Practice and Relapse Prevention When Using Anti-depressants
The Mindful Journey
The Benefits of Mindfully Washing Dishes
The Difference Between Mindful Focus and a Mindful Attitude
Mindfulness Training Shows Promise for Attention-Deficit Hyperactivity Disorder
Mindfulness and Managing Chronic Pain
How We Might Stop Bullying: Kindness Curriculum for Preschoolers
Practicing Loving-Kindness May Elicit Resentments
How Mindfulness Can Reduce Risk for Alzheimer's and Heart Disease
Mindful Attention to Unhealthy Foods Improves Food Choices
Want an Easy and Uplifting Health Practice? Laughing Qigong
Mindful Dating: How Does Mindfulness Affect Satisfaction in Relationships?
10 Everyday Frustrations and a Mindful Attitude
What is the Difference Between Mindful Acceptance and Emotional Suppression?
Mindful Attention Reduces Anger for Those With Borderline Personality Disorder
The Paradox of the Mindful Attitude
The Key to Mindful Breathing for Sleep
Addiction to Emotions and Mindfulness Practice
Mindfulness Practice is Not Focusing, It is Re-Focusing
How Much Should You Practice Mindfulness?
For Fun--Try Being Mindful About the Weather
What Could Be More Mindful Than a Cat Watching Bird Videos?
Wisdom Doesn't Come In Sound Bites
Qigong Can Reduce Depression
Demands vs. Mindfulness for Enhancing Performance
Acceptance as the Basis for Wisdom?
“I want to feel good NOW!”
The 20-Minute a Day Miracle
Be the Best You Can Be: On Mindfulness and Performance
Being Mindful of Emotions Decreases Intensity
Massage: Effects on Anxiety, Depression, and Pain
Mindfulness and Flow in the Workplace
Mindfulness May Prevent Relapse
Is Mindfulness-Based Therapy Effective?
Qi Gong Exercise Shown to Improve Mood
Mindfulness Skills Can Improve Relationships