It has long been shown that discontinuing anti-depressants has a high relapse rate. However, when mindfulness training results in greater emotional tolerance, not only does the relapse rate decline but improvement continues. Learning how to decenter from mindfulness training increases curiosity and the tolerance of thoughts and feelings because they are viewed as temporary events in the mind (Bieling, et al., 2012).

However, additional research examining the same patients showed that when mindfulness training results in greater emotional tolerance it continues to reduce depression after medication is stopped. Read more...

When I first started learning Tai Chi, I expected to learn everything, every move within a few months. I wanted to master Tai Chi in ten easy lessons. I saw all knowledge as something to be conquered—tell me how and I can do it.

Instead, I discovered frustration. Just learning the movements seemed impossible. Normally, I have a good memory. In fact, at the same time I started Tai Chi I was learning katas in my karate and I could easily remember those. But the Tai Chi movements eluded me. Wasn't it just another kata, I thought? I bought books to help me remember what I was being taught, but I still couldn't seem to get the movements down. I almost quit out of frustration but my instructor told me to not worry about memorizing the movements. He encouraged me to just attend and enjoy the class without even practicing outside of class. Read more...

Intuitive vs. Deliberate Thinking: Which is Better?

When answering this question, for our purposes, it is not whether you got the right answer, but how you went about answering the question. Intuitive thinkers will jump to an automatic response that is often incorrect whereas analytical thinkers will think through the math of the problem and more likely achieve the correct answer. Therefore, this test is not an intelligence test as some people describe but shows how you think through problems. Read more...

The Benefits of Mindfully Washing Dishes

Simple daily exercises can increase your mindful state. Researchers gave subjects a passage to read prior to washing dishes. Half the subjects read about the sensory mindful experience of dishwashing and the other half read about dishwashing techniques. Those who read the mindful approach to dishwashing showed a 27% decrease in nervousness and a 25% increase in mental inspiration whereas those who read about techniques did not show a significant change (Hanley et al., 2015). Read more...

Being Too Aware of Your Body Can Lead to General Worrying

Excessive worrying can be problematic for some people causing extreme anxiety and interfering with relationships. The official diagnosis for this problem is called Generalized Anxiety Disorder (GAD). Interesting research by Andor and colleagues (2008) shows that being too attentive to the normal physiological changes in the body can lead to excessive worrying.

Everyday, we all have changing physical sensations in our bodies which can fluctuate from hour to hour or minute to minute. Most of us dismiss these normal fluctuations before they even reach our conscious awareness. However, the researchers found that those with GAD are more aware of these sensations. Read more...

The Difference Between Mindful Focus and a Mindful Attitude

In some ways, it is unfortunate that mindfulness is becoming more mainstream because it means that the term (if not the concept) is being co-opted and used in ways that are not necessarily an accurate reflection of mindfulness. For instance, someone just pointed out to me that the military is using mindfulness training to improve the effectiveness of their soldiers. In other words, potentially to help soldiers be better at killing (although a case could be made that it makes them better at problem resolution—one resolution which may be killing).

In any case, I would not call this training “mindfulness.” Instead, it is teaching the soldiers to be mindfully focused similar to an athlete being “in the zone” or “in the flow" (although perhaps some of those soldiers will move on to developing a more mindful attitude). The techniques that are used in this training may come from the mindfulness practices, but it is not true mindfulness. Mindful focus does not have the ability to bring peace to the world because it only uses one aspect of mindfulness. Which is why I refer to developing “the mindful attitude.” Read more...

EVENT: Husband doesn't understand my ADD and gets angry.

THOUGHTS: "My husband knows that I suffer from Attention Deficit Disorder (ADD} which means sometimes I'm not really in the moment when I am doing something. The way he pushes my buttons is to put something somewhere and leave it there knowing that I am working or cleaning in that particular area of the house and he does not say "I need you not to move or touch this thing right here." Then he becomes loud and aggressive when I move it and do not realize where I moved it to.”

HOW CAN YOU CHANGE THE THINKING? What is another way of thinking about the situation that won't cause the feelings of frustration, agitation, and exasperation?

Question: My husband knows that I suffer from Attention Deficit Disorder (ADD} which means sometimes I'm not really in the moment when I am doing something. The way he pushes my buttons is to put something somewhere and leave it there knowing that I am working on cleaning in that particular area of the house and he does not say "I need you not to move or touch this thing right here." Then he becomes loud and aggressive when I move it and do not realize where I moved it to.

A number of studies show that mindful techniques can help reduce the problems associated with Attention-Deficit/Hyperactivity Disorder (ADHD). Research is still in the early stages and more is necessary to draw strong conclusions. However, this early research is promising in showing that mindfulness training can improve attention and behavioral control among those with ADHD.

Forgiveness and the Process of Healing 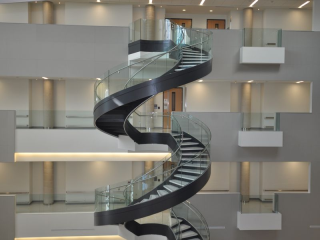 Excerpt: Often people think of healing, if shown on a graph, as a straight line rising upward showing progress. Although they recognize healing has its ups and downs, they still expect movement to average out to a straight line showing improvement. Thinking of progress this way, if they return to a familiar issue they believe they have already dealt with, they think of it as backsliding and feel like they are starting over.

However, I like the concept of “recursion” which I think describes more accurately what people experience when they are healing. The word “recursion” comes from computer science and refers to a method of programming where the ultimate solution to a problem depends upon having solved previous aspects of that problem. To best explain the recursive process, think of a spiral staircase. What you see, instead of a straight line, is a line that proceeds in a circular fashion but rising from level to level. When you walk to a higher level on a spiral staircase and look at the view it is the same as what you saw at the same point on the lower level but your perspective has changed. You now see it in a different way from the higher viewpoint.

Many times my clients will say “I thought I resolved this issue. Why am I dealing with it again?” If you think of progress as a spiral, you can see that it is rising from level to level. However, as you proceed through each level you come back again and again to the same point—the same issue. But you're returning to that issue at a higher level with a different perspective. Read more...