Why Didn't S/he Do Something About It? Emotional Differences Between a Real Situation and an Imagined Situation
by Monica A. Frank, PhD 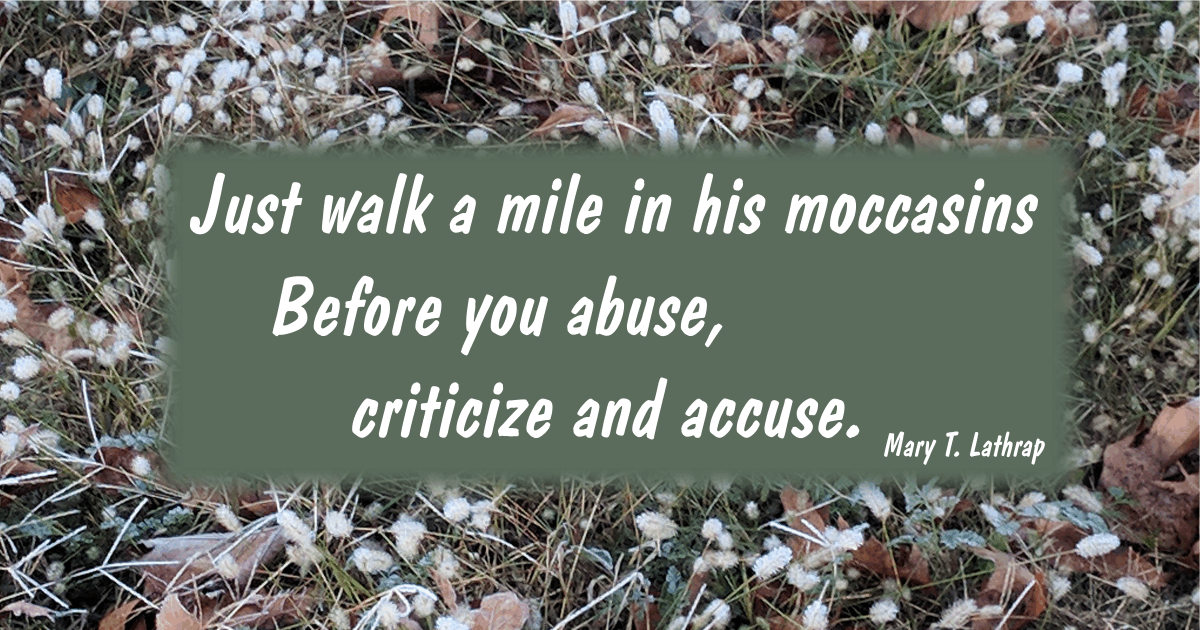 Frequently, people question other people's decisions and behavior. “Why did she stay with an abusive husband?” or “Why did he lie and deceive?” or “Why didn't they make better financial decisions?” or “How could a parent abandon his or her family?”

We typically believe that in a similar situation we wouldn't make the same choices. As a result, we may be judgmental and critical of the decisions others' make. Yet, when faced with a similar situation, what we want to believe we would do and what we actually do can be very different.

It is often said that to truly understand someone else we need to walk a mile in their shoes (see the poem below from where this idiom may have been derived). Research shows us, though, that we can't just imagine what someone else experiences and decide what we would do in their situation. Imagining can lead us to the wrong conclusion.

Researchers Woodzicka and LaFrance (2002) found that the primary emotion when a woman imagines sexual harassment is anger whereas the emotion when a woman experiences actual sexual harassment is fear. Thus, a real situation varies significantly from an imagined situation and the emotions that are elicited can lead to opposite outcomes. Fear is defeating whereas anger is empowering. Anger provides different solutions than fear and causes a person to behave differently than fear. An angry person may fight back, leave and/or report the situation. Whereas a fearful person may feel trapped or doubt her perception of the event.

So, we can't truly know what we would do unless we have actually walked that mile. And since we can't ever fully experience another person's life, how can we be critical of their decisions and behavior? Of course, this doesn't mean that people aren't responsible for their decisions and may have to deal with the consequences of their behavior. Instead, it means to have empathy rather than criticism for others.

That's why it is much more powerful when someone shares experiences and says “I've been there, too.” For instance, a person in AA may feel less judged and more willing to listen because the others in the group have walked a very similar mile.

Pray, don't find fault with the man that limps,
Or stumbles along the road.
Unless you have worn the moccasins he wears,
Or stumbled beneath the same load.

There may be tears in his soles that hurt
Though hidden away from view.
The burden he bears placed on your back
May cause you to stumble and fall, too.

Don't sneer at the man who is down today
Unless you have felt the same blow
That caused his fall or felt the shame
That only the fallen know.

You may be strong, but still the blows
That were his, unknown to you in the same way,
May cause you to stagger and fall, too.

Don't be too harsh with the man that sins.
Or pelt him with words, or stone, or disdain.
Unless you are sure you have no sins of your own
And it's only wisdom and love that your heart contains.

For you know if the tempter's voice
Should whisper as soft to you,
As it did to him when he went astray,
It might cause you to falter, too.

Just walk a mile in his moccasins
Before you abuse, criticize and accuse.
If just for one hour, you could find a way
To see through his eyes, instead of your own muse.

I believe you'd be surprised to see
That you've been blind and narrow minded, even unkind.
There are people on reservations and in the ghettos
Who have so little hope, and too much worry on their minds.

Brother, there but for the grace of God go you and I.
Just for a moment, slip into his mind and traditions
And see the world through his spirit and eyes
Before you cast a stone or falsely judge his conditions.

Remember to walk a mile in his moccasins
And remember the lessons of humanity taught to you by your elders.
We will be known forever by the tracks we leave
In other people's lives, our kindnesses and generosity.

Take the time to walk a mile in his moccasins.