Why People with Depression Avoid Positive Experiences: or, It's Impossible to Pull Yourself Up by Your Bootstraps
by Monica A. Frank, PhD 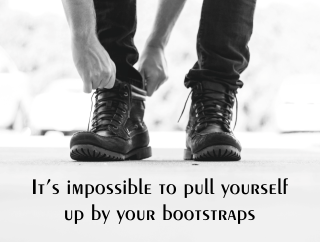 “Look at the positive.”

“Do something that is fun.”

Although commonly heard by those with depression, messages such as these have little impact on depression. And then the very unhelpful follow-up (whether thought or said) is frequently: “You're not really trying.”

Let's look at these messages from a purely physical point of view. What if a person with chronic pain was given these same messages? Do you think it would help? That if only they would try to be more positive, they wouldn't hurt so much?

If you've read previous information I've written about depression, you know that I think of it as a physical illness with a psychological component. This is no different than heart disease. We know that cognitive therapy for people with heart disease can reduce heart attacks. Why is that? Is it because heart disease is all in the head and they are not trying hard enough? No, it is because cognitive therapy addresses the psychological component than may be present for many people. For instance, if someone feels hopeless about their disease they are less likely to take care of themselves which can impact their health.

The same is true of depression. Some people have just the physical manifestation of depression: fatigue, low energy, sleep disturbance, appetite disturbance, change in activity level. These physical symptoms of depression can impact work or everyday activities. Based on these criteria, a person can be diagnosed with depression without a depressed mood or feelings of worthlessness, guilt, or hopelessness.

Why, then, is the focus on the depressed mood?

Let's look at the psychological component which is frequently present. The question then is if depression is considered a physical illness, why do many people with depression have a depressed mood or feelings of hopelessness, guilt, etc?

If we consider that when a person repeatedly struggles with “pulling themselves up by their bootstraps”* or trying to make themselves feel better, and their efforts only lead to further disappointment, it makes sense that eventually they may feel hopeless or blame themselves.

An analysis of over 50 research studies examining depression and positive bias concluded people with depression place less value on positive goals and positive experiences or information because of repeated associations with some sort of negative experience. An interesting example they reported was when researchers prevented thirsty people from getting a drink of water, the unconscious reaction was to place less importance on the need for water (Winer and Salem, 2016).

Similarly, the same process occurs for those with depression. Think of this concept multiplied by the numerous attempts people with depression make to feel better only to be disappointed again and again. It makes sense that eventually they place less importance on positive experiences and their mood will worsen.

How can Cognitive Therapy help?

This is often the challenge of cognitive therapy. How can a person with depression be helped to feel better when they are actively avoiding positive goals and interactions because of the negative associations? For instance, looking at this from a physical point of view again, just as cognitive therapy can reduce heart attacks, it can help people with depression feel better if we can improve their self-care behaviors.

How can we do this? My approach has been to build on small successes in order to bypass these negative mental connections and create more positive ones. One way to help them get started is to convince them that depression is not a mental weakness but is a physical illness and the focus is on learning to take care of themselves as with any illness. By doing so, we change the approach of treating depression from improving the mood to focusing on self-care which can increase success and improve the mood as a by-product.

*By the way, did you know that “pulling yourself up by your bootstraps” refers to the IMPOSSIBLE and ridiculous task of lifting yourself off the ground by pulling on your bootstraps but eventually came to mean doing something difficult through your own efforts?

Winer, E.S. and Salem, T. (2016). Reward Devaluation: Dot-Probe Meta-Analytic Evidence of Avoidance of Positive Information in Depressed Persons. Psychological Bulletin, 142, 18–78. DOI:10.1037/bul0000022
Copyright © 2017 by Excel At Life, LLC.
Permission to post this article is granted if it includes this entire copyright and an active link.