Reduce Worry By Thinking About It?
by Monica A. Frank, PhD 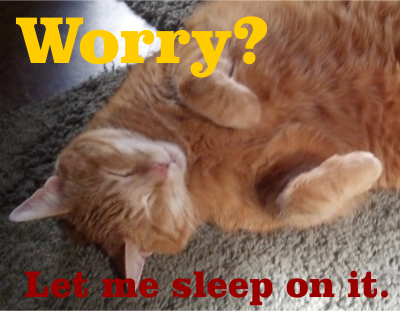 People typically believe the problem with worry is the anxiety caused by thinking about a situation. They are told by well-meaning others: “Don't think about it and it won't bother you.” Yet, not thinking about worries can create more of a problem. The issue is how you think about worries. The problem with the approach many take with worry is that their thinking remains abstract. The worry itself is often not clearly defined and the thoughts about the worry are very general: “What will I ever do if such-and-such happens?” or “How can I possibly handle that?”

It may seem that worry itself creates a great deal of distress but the reason people engage in worry is to prevent greater emotional distress. By engaging in abstract worry thoughts they avoid the emotional details of the situation. A good example is a Google Play comment about The Worry Box app: “I have been looking for something to help with my fears not remind me of them...don't get it!” Unfortunately, then, worry also prevents problem-solving because the person is not examining the nitty-gritty aspects of the situation and how to handle it.

Often in my clinical practice when clients expressed anxiety about their worries, I asked them for more information. For instance, if someone was worrying about losing their job, instead of focusing on the possibility of losing the job, I asked them, “And then what?”

They often responded, “What do you mean?”

“Well, what happens if you lose your job? How long before you and your family are living on the street?”

“I have family that will help out.”

“What if that doesn't work out?”

“There are community resources that can help. But that's not what I'm worried about. What will people think of me?”

And then we would go through it again: “What might they think of you?”

A recent set of experiments by Helen Jing and her colleagues at Harvard University showed how worries could be made more specific, and by doing so, could reduce the negative impact of worry. In their research, they first asked the participants to write thirty worries that could occur in the next few years. They asked questions to obtain more specifics such as “What exactly about this event worries you?” and “What is it that you fear?” and “What do you hope for?”

Then, they triggered the episodic memory which is the memory more associated with imagery of events like when you recall getting married or watching a sporting event. Typically with worry, people are only using their verbal memory. Instead, the researchers activated a different part of the brain by having people watch a simple video of two people working in a kitchen and then describing the video in detail.

The participants were then given stories related to their personal worries that had a beginning and an ending solution. The participants were instructed to write out the steps in-between to achieve the solution. So, a possible scenario could be “Emily was afraid that if she didn't get her presentation done on time she could lose an important client” with a solution of “Emily didn't complete the presentation in time but was able to retain the client. How did she do that?”

After that, the participants were given negative outcome scenarios related to their worries and asked to imagine the scenario for a couple minutes so as to experience the emotion related to the event. Then they spent five minutes imagining themselves reinterpreting the event so it was less negative.

A method very similar to the process described in this research that I've used frequently with clients is creating an imaginal coping script. The only difference is that I didn't prime the episodic memory by having them describe a non-arousing situation. The researchers found that by first having them describe the video of two people working in the kitchen they were then able to provide a more descriptive account of their worries as well as a more detailed list of steps to cope with the worries. So, let's add that into the procedure.

1) Trigger the imagery process. Watch someone engaged in a simple, everyday task. Then describe the person, the setting, and the task with as much detail as you can.

2) Think about the worry in detail. Imagine the scenario and write out as descriptively as possible what you imagine. I would find that most of the time the clients weren't very descriptive so I would give them a page goal such as “write three pages describing this event and how you expect to feel.” Also, I explained to them that this process would likely elicit intense emotions and they needed to have a plan for coping with the emotions afterward such as doing a relaxation exercise.

3) Insert a coping plan. This needs to be a separate step and not done at the same time as writing about the worry. To create a coping plan, use the written description of the event and insert throughout the description ways to cope. This might include steps you could take towards a solution or it could be a different way of thinking about the situation or it could be a stress management exercise.

4) Read or record the script. The final step was to read or listen to the script repeatedly until their anxiety or worry reduced and they felt they could handle the situation.

Before using this method with an intensely emotional event, it is best to have the guidance of a therapist. Also, this method is best for concrete, possible future events, not for catastrophic, general worries such as “What if my husband dies?”

Being Too Aware of Your Body Can Lead to General Worrying
“Which Coping Strategy Should I Use?”
Listening to the Message of Anxiety
Be Sure to Sleep After Exposure Treatment
Treatment for Long-term Generalized Anxiety Disorder (GAD) May Differ from Short-Term GAD
The Difference Between Normal Worry and Generalized Anxiety Disorder
Anxiety Disorders May Not Be As Prevalent As We Thought
Best Predictor of Treatment Outcome for Anxiety Disorders
How Effective is CBT for Children With Anxiety Disorders?
Listening to Your Heart Helps Moral Decision-Making: But is it Good for Fear Avoidance Decisions?
An Anxiety Disorder is Not Weakness!
Why Some Girls Are More Vulnerable to Developing Depression/Anxiety When Marital Conflict is Present
Anxiety and the Avoidance of Positive Emotions
Massage: Effects on Anxiety, Depression, and Pain
Effects of Introversion When a Person has Panic Disorder
CBT Reduces Anxiety During Breast Cancer Treatment
Afraid of Feeling Good?