Exposure Treatment of Simple Phobias in Children
by Monica A. Frank, PhD 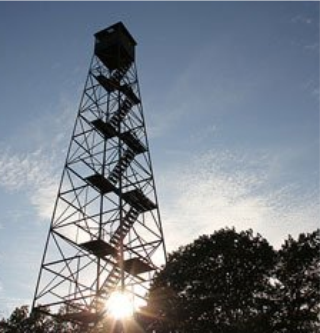 In my early career one of the cases that impressed upon me the effectiveness of exposure therapy when anxiety is caught early in childhood was a 10-year-old boy who had a fear of heights and crowds. He had a high degree of motivation to overcome his fear because he felt embarrassed that his younger brother could climb to the top of a old fire observation tower that was in a local public park. (This was in the days when it wouldn't be considered parental neglect to let your child climb a six story open rail tower—see picture)

So we developed a plan:

1) Anxiety management. I taught him a few exercises to reduce anxiety such as breathing and progressive muscle relaxation.

2) Coping script. Together we wrote out a description of what he imagined climbing to the first level of the tower would be like. Since he had already tried it once he could describe what it looked like and his anxiety symptoms. Then I helped him insert some ways to cope such as sitting on the step for five minutes and breathing slowly. We also included some self-talk statements that he created such as “I can do this.”

3) Record, listen, practice. His instructions after the session was to record the script we had written and listen to it over a few days. Then before he came for his next session his parents were to take him to the tower and practice exactly what we had written.

When he came in for his next session he reported that he had climbed to the first level of the tower and that it was scary but he managed to stay there for the full five minutes. Then we added to the script by describing climbing to the next level, sitting on the step to calm himself and, once he was ready, standing by the railing. Again, we inserted coping methods and self-talk.

The third session we followed the same plan for the third level of the tower. The following session he came running down the hall and burst into my office: “I climbed all the way to the top of the tower!”

Not only that but his fear of crowds had diminished as well. When a person faces one fear successfully they often have increased confidence and other fears become less intense. This case illustrates how helping children face fears can teach them a life lesson that will allow them to confront other challenges.