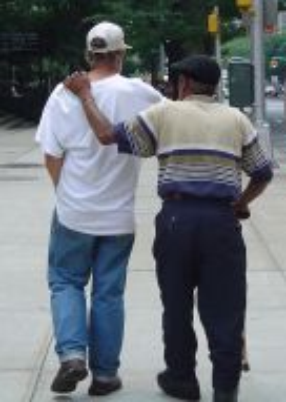 Growing older is often a confusing time. People tell you how lucky you are to retire and yet you might not feel so lucky. Most people feel loss with aging and need to come to terms with these changes. Also, what many people don't understand is that life doesn't stop at a certain age. Although your life may have changed, there is still the question of what you want to do with your life.

This audio addresses various issues with which people are confronted as they age: loss, change, need for sense of purpose. As you grow older, it is common to revisit the stage of identity development with questions of "What do I want?", "What is meaningful in my life?", and "What do I do now?" By focusing on the present rather than the past and addressing these issues you can approach this stage of life with integrity rather than despair.

As people grow older, they are navigating new territory in their life. Most likely, those who are successfully navigating their older age are not listening to this audio so I will address issues for when people are feeling despair and regret as they grow older. In this audio, I will discuss coping with loss and addressing self-esteem issues in addition to productivity and achievement later in life to assist with reviewing your life with a sense of integrity rather than despair.

So, if everyone experiences losses and change with aging, why do some experience despair whereas others feel a sense of integrity about their lives? The answer may be due to how they cope with grief and loss and how they feel about themselves as well as how they view productivity and achievement in older adulthood.

Although loss is inevitable with aging, some people have trouble grieving the natural changes of age. They may feel justified grieving a death, but they might not feel it is okay to grieve retirement or other changes in their life. For instance, it might seem like you shouldn't be grieving because you've had a good life. Maybe you have raised a wonderful family. Maybe you have had a productive career. You've accomplished many things in your life. And yet, you feel the loss. Therefore, it is important to acknowledge the loss so that you can grieve and be able to move on. Many people don't acknowledge the necessary losses of life such as retirement. To enjoy retirement you may have to give up a career that was fulfilling to you. Too frequently people focus on how lucky you are to retire and don't recognize the loss that comes with this major change in life.

Another common loss is that many people have health issues as they grow older. Successfully navigating the grief does not mean ignoring it. Those who cope with loss are those who acknowledge it, feel it, and come to a resolution. Too often, people want to immediately resolve grief. They might say, for instance, “I can't do everything I used to do. That's okay because there are still other things I can do.” Certainly, that is a healthy resolution but prior to a successful resolution the individual needs to acknowledge the loss and grieve. Then, when they get to the resolution, they will fully feel it rather than just saying the words.

There is a natural tendency as people move into their older ages to look back and evaluate their lives. When people look back over their lives, their view is often colored by the lens of their self-esteem. In other words, people who generally have been negative about themselves throughout their life are more likely to respond with despair whereas those with high self-esteem are likely to feel a sense of integrity. For those who feel despair, it is necessary to recognize that it is not too late to change your self-concept.

Self-criticism is toxic. The people who probably should be critical of themselves such as criminals and psychopaths who have harmed others, usually aren't. They tend to see themselves as victims or to blame the victims. Therefore, most of those who are overly self-critical are likely to be inaccurate in their self-assessment. They usually tend to engage in negative filtering, only evaluating certain aspects of themselves and/or seeing only the negative when positive aspects exist. This is the reason self-criticism is toxic. It is often inaccurate to a large extent and poisons a person's self-concept. A reasonable self-assessment is healthy but is able to examine the positive as well as the negative. So, if you find yourself primarily negative in your self-evaluation, it is likely to be inaccurate. As a result, it only contributes to despair rather than to positive change.

If you examine yourself too harshly, change your self-perception. It is never too late to change yourself. Don't accept that overly critical self-assessment. Look at your life from all perspectives. Make a list of your positive qualities and accomplishments. Don't dismiss them as unimportant. For people who are self-critical, no criticism is too small to ignore. So don't ignore the positives by diminishing them. Build yourself up rather than tear yourself down. Once you can examine yourself more realistically, it then becomes possible to look at your life and what you want from life more accurately and enthusiastically.

Another issue for some people as they age is that they believe they haven't accomplished what they wanted in life. Others, who may have achieved a great deal during their productive years, are grieving the inability to do what they did before. They are no longer receiving the accolades or the financial rewards. It may be true that they can no longer do what they used to. However, does that mean they can no longer be productive or achieve anything? No, that is not true. You might have to go on a search of self-discovery to find the meaning in your life. But the search for identity is not limited to youth. Periodically, people need to revisit what their life means to them and what gives them a sense of purpose.

We live in a society that is youth-focused. Again and again you hear the stories of youthful success to the extent that it almost appears that if you are over forty there is no reason to even try. As a result, many people as they grow older don't even think of what they want to do with the rest of their life. They are told and believe, “You're retired. You can take it easy now.” That might be fine for awhile. But think about this, when you retire you can easily have 15, 20 or even 30 productive years ahead of you. That's almost as much time as you put into work.

The question is: how do you want to spend the time you have left? Research shows us that staying productive in older age is an important key to long-term health and happiness. You might think that there is nothing you can do. That you are too old. Or, that you don't have the capability you once had. But that is not true!

Age is an attitude. If you buy in to the youth culture, you might have the attitude that you can't accomplish anything after a certain age. You might think it is too late to pursue your dreams, to start a business, to write a novel, to invent a new product. However, age is an attitude. And attitudes can be changed. As Mark Twain, the American humorist said, “Age is an issue of mind over matter. If you don't mind, it don't matter.” If you believe that you can still have a sense of purpose as you grow older, you can.

You are never too old to become an artist. Grandma Moses became a renowned folk artist although she didn't start painting until she was over 75 years old.

You are never too old to write. If you have ever played card games, you have probably heard the phrase “according to Hoyle”; Edmund Hoyle wrote the first rules of card games when he was in his seventies.

You are never too old to take care of your health. My grandmother, who was very active throughout her life but had never exercised, started riding a stationary bike in her seventies because her doctor told her it would be healthy for her.

You are never too old to invent something useful. My father-in-law invented and patented fishing rod holders including one for wheelchairs when he was in his seventies. He received an international award for his inventions.

You are never too old to start go to school and start a new career. When I was in graduate school I had a supervisor who was on his third career. After retiring from the military, he went to school for engineering. He retired from engineering and received a doctorate in psychology in his sixties. I remember reading a letter to Dear Abby from a woman in her forties who asked about the advisability of going back to college. Specifically, she lamented “I'll be almost fifty by the time I graduate.” Abby's response was “How old will you be if you don't go back to college?” Which reminds me of a quote from George Elliott, the novelist: “It is never too late to be what you might have been.”

Now is the time to do what you always wanted to do. Sure, you might have to modify your dreams. Perhaps you can't get around as well as you used to. Perhaps you need assistance. Maybe you don't have as much energy. Or much money. However, that doesn't mean you can't do anything. Do what you can! As they say, “Rome wasn't built in a day.” Just doing a little bit at a time can accomplish a great deal. Tolkien was in his sixties when “Lord of the Rings”, a set of books over a thousand total pages, was published. It was said that he wrote only 250 words a day which is equivalent to about one page. Sure, it might have taken him fifteen years to write one of the best-selling novels of all time, but he did it by doing a little at a time.

You don't need to miss opportunities now just because you are older. Prove the youth-culture wrong. Do what you want to do. “Follow your dreams” is not just for the young.


Copyright © 2014 Excel At Life, LLC.
Permission to post this article is granted if it includes this entire copyright and an active link.