×
Why Are People Mean? Don't Take It Personally!


Read the following to:
Related articles by Dr. Frank:

To help you determine why a person might be mean:
Reasons for Meanness Inventory

Psychological self-protection occurs when one feels they are being threatened in some way. Self-protection can certainly be a positive behavior when protecting the self from toxic or aggressive people. However, under some circumstances a person may be excessively focused on guarding their feelings, ideas or self-image.

Usually, such extreme self-protection is due to a fragility of self and lack of confidence. In these circumstances, a person's behavior may appear baffling to others and considered mean.

Even though some people in this category can be malicious in their meanness, most of the time they are desperately trying to protect their fragile self-image albeit in a not very effective way. Meanness in the case of self-protection is often due to the individual's inability to take responsibility for their problems and to do something about it.

With self-protection we see a wide range of severity of meanness. The healthier people try to recognize when they are mean, apologize and make amends, and try to make changes. However, no one is perfect so they may continue to make mistakes. But at least they recognize the mistakes. Whereas the less healthy people are completely ignorant of their responsibility for their behavior and don't try to make improvements.

The following is a list of reasons people engage in self-protective meanness. However, just because there may be an explanation for meanness, I do not intend to suggest that the meanness is justified. Instead, by understanding the reasons for someone's mean behavior we can reduce the impact on us as well as handle the situation more effectively.

When dealing with self-protective people, it is important to recognize that they are being mean because of their personal flaws, not because anything is wrong with you. For some of these people, the problem may be resolved by confronting the behavior. 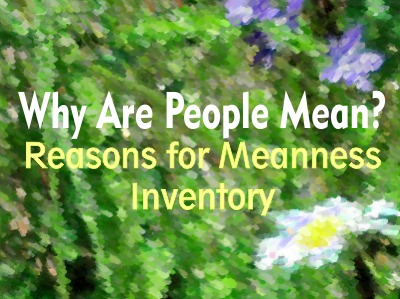 1) Projection. Instead of admitting shortcomings, people may project their personal flaws onto other people and accuse them of the behavior they don't acknowledge in themselves. For instance, someone who is dishonest may perceive everyone else as liars and thieves and accuse them of trying to take advantage of him or her.

2) Superiority Complex. Some people who are unable to acknowledge their low self-esteem may compensate by acting as if they are better than others. Their meanness may often be sarcastic or even direct put-downs such as “It's so obvious. Anyone with an ounce of brains would know that.”

3) Passive-aggressive Escalation. A method used for self-protection is passive-aggressive escalation. The purpose of this behavior is to aggress in such an indirect way that it causes the recipient to react and look like the bad guy. My article Crazy-Makers: Dealing With Passive-Aggressive People describes this process in more detail.

4) Jealousy. Some people with low self-esteem may engage in meanness out of jealousy. They tend to be insecure and might try to criticize others in an attempt to feel better about themselves. For instance, “She thinks she's so much better than us—look at how she flaunts herself with those expensive clothes.”

5) Rationalization. Attempts to defend the self-esteem by supplying logical reasons rather than acknowledging and taking responsibility for the real reason are known as rationalizations. For example, someone is fired and states “I didn't kiss up to the boss” rather than recognizing that poor performance was the cause.

Many people are uncomfortable with intense emotions and try to reduce the intensity in various ways. One way of doing this is intellectualization which is focusing on the less emotional internal processes rather than feeling the emotions. For example, someone focuses on the details of arranging a funeral rather than the feelings of grief due to their loss.

Sometimes this intellectualization can be perceived as mean because it may lack empathy or connection with another person's feelings. Other people may take this as meaning the person doesn't care or even that their feelings are being ridiculed. For instance, someone not comfortable with emotions might comment “Why are you so upset?”

Some people protect themselves by trying to control others. They are trying to create a comfortable world for themselves. In the process they may cause a great deal of discomfort for others.

1) Anxiety. When people are anxious and fearful they may tend to avoid situations that cause anxiety. Sometimes they might try to control those close to them so as to avoid anxiety. For example, a husband who is afraid of being perceived as weak may be critical of his wife in front of others.

Or, a woman who is afraid of having anxiety or panic if she's alone may control her family's activities by wanting them to stay with her. What makes this type of situation more “mean” is when the anxiety is not acknowledged and the method of control is indirect such as using guilt: “You don't really care about me. You don't want to be around me.”

2) Need to Be Right. Some people try to protect their self image by being perfect. They might believe living the perfect life proves their worth. Unfortunately, some may also have the need to point out to others their “perfectness” by disparaging others.

This need to be right is considered to be controlling because it has the effect of silencing others when they might disagree. This type of self-protective person prevents opposing opinions from intruding into their view of themselves in the world.

3) Validation. You have probably heard the saying “Misery loves company.” For some people who are miserable, validating or confirming their negative view of the world helps them to feel less miserable because they can feel good about their assessment: “See, people are only out to take advantage of others.” They prove their view by being mean which is likely to generate meanness in return. Thus, it creates a cycle of validation.

Many people who have been seriously hurt or traumatized may feel others cannot be trusted and have developed methods of self-protection in order to survive. Some of those methods may be perceived as mean whereas other methods may actually be hurtful.

1) Withdrawal. A common way to deal with lack of trust in others is to withdraw from contact with others. Withdrawal can be complete social isolation, but since that is very difficult to achieve in a world where we must rely on others withdrawal is often more subtle. It may be avoidance of certain types of situations or interactions with others.

Sometimes this withdrawal may be perceived as mean by others because they don't understand the underlying fear causing the behavior. All they see is how the person acts.

For instance, Ann who had been abused as a child and was in an abusive marriage turned down invitations to lunch by co-workers. She was afraid that her husband would become jealous of a friendship and fly into a violent rage. However, her co-workers didn't know the reason. They just thought she was unfriendly.

2) Identifying With the Abuser. Occasionally when someone has been abused they survive by identifying with the abuser and modeling their behavior. The purpose of this is that they see the abuser as powerful and they want to be in control so that no one can hurt them again.

They don't trust other people based on their experience with abuse and believe that the only way they can protect themselves is to be powerful. However, this type of person can cause considerable harm to others because they have become an abuser, too.

3) Preventing vulnerability. Another way abused people protect themselves is to avoid being vulnerable. They may do this by showing a “tough” front which may come across as rude or mean. Sometimes they believe politeness demonstrates weakness and don't want to appear “weak” to others.

Copyright © 2011 (Revised 2022) by Excel At Life, LLC.
Permission to reprint this article for non-commercial use is granted if it includes this entire copyright and an active link.