50 RULES OF LIFE
Rule 4: Make Your Share of Mistakes

Changing the way you think about failure or making mistakes can open a world of possibilities. Too often people are afraid of making mistakes and because they are afraid they don't try. Or they quit. As a result, they may not make a mistake but they also don't succeed.

Success requires mistakes. If you only do what you know will work you really aren't achieving anything new. You are only repeating what has been done before. Therefore, if you desire to be truly successful in life, you need to make your share of mistakes.

How can mistakes help you?

1) Mistakes teach. Thomas Edison, the inventor of the light bulb and many other useful products, said when he struggled with creating the light bulb “I have not failed. I've just found 10,000 ways that won't work.” By eliminating what didn't work he was able to create what could work.

When we make mistakes we have the opportunity to learn something new. How can something be bad if it is teaching you something valuable? You can choose to embrace the possibility of mistakes. Try, fail, and learn from it. Success is often the result. 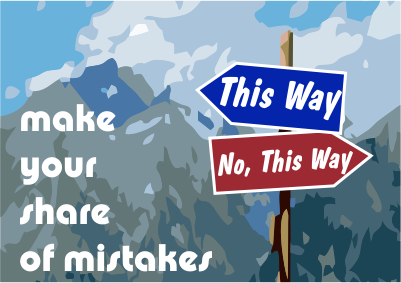 2) Mistakes provide possibilities. Another quote from Edison, who persisted no matter whether he succeeded or not: “Just because something doesn't do what you planned it to do doesn't mean it's useless.” Mistakes or failures can often provide something of value when you examine the mistake rather than ignore it or give up.

A word that I love both because of the sound of it as well as the meaning is “serendipity.” It means to find something unexpectedly. This often means that a mistake of some sort occurred.

For instance, famous psychological experiments by Pavlov in which he defined the concept of classical conditioning were begun due to a perceived failure in the experimental process. Classical conditioning, which may seem fairly obvious now, is when you pair one event with another it will create the same response to the paired event. For instance, if you pair ringing a bell with feeding a dog eventually the dog will expect to be fed when the bell is rung.

However, the classical conditioning research was undertaken due to what Pavlov thought was a mistake in his experimental design. He was studying digestion in dogs and found that he was having difficulty measuring the saliva because the dogs started salivating when the technicians prepared the food rather than when they began eating. Long story short, he discovered the theory of classical conditioning serendipitously by trying to determine what the problem was in his experimental design.

3) Mistakes may not be failures. Mistakes could be one step in the process that may look like a mistake just because the desired outcome hasn't been achieved yet. Again, Thomas Edison (seemingly an authority on failure and yet ultimately so successful) said “Many of life's failures are people who did not realize how close they were to success when they gave up.”

Do not assume that just because you have not succeeded right away that you have failed. I often see this occur with my clients who are trying to make major changes in their lives. What they see as failure I often see as success because it is a necessary step toward their goal. For example, a client who is working on controlling his temper may say, “I messed up and yelled at my son” and I might respond “But you were aware of it right away and even apologized.” I recognize that the more this person is aware of his behavior the more likely he will be able to control himself in the future. Therefore, the fact that he noticed his behavior and took responsibility is a success.

If you change thinking about making mistakes, you can achieve so much more whether in your personal life or your professional life. Learn to think of making your share of mistakes because that means that you are trying, you are making an effort. The more you try, the more opportunity you have to succeed. The most successful people in life are also those who have made more mistakes. However, mistakes don't hold them back but help them to focus their attention on discovering the next step to take.

Think of mistakes as decisions. Not all will work out the way you want. But all can be opportunities for success. When you learn from mistakes, they aren't really failures, are they?


Copyright © 2014 by Excel At Life, LLC.
Permission to reprint this article for non-commercial use is granted if it includes this entire copyright and an active link.