Do Not Go Gentle: Mental Decline and Aging
by Monica A. Frank, PhD 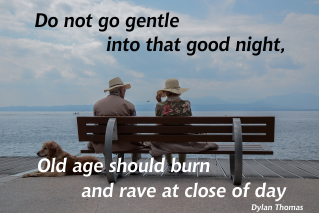 As people age, a primary fear is the loss of mental capacity. Most people eventually come to terms with the physical decline in health and abilities. But mental decline causes greater isolation and feelings of loneliness because mental abilities are our lifeline of connection to others. So, finding ways to reduce mental decline is an important factor in improving well-being as we age.

Although previous research has shown that elderly who engage in social activity show less mental decline, the key may not be the social interaction itself. It was thought that social contact provided emotional support reducing stress that can affect mental abilities. Or, that socially engaged people often participate in mentally challenging activities, such as card games, keeping the mind active.

However, reducing mental decline as we age is more complex than that and is impacted by several factors (Brown et al., 2016):

1) Mental activity. When researchers studied a group of people over time they found that those who were more social tended to engage in more challenging mental activities even when alone. Although it may be that mentally active people are more social, it also seems that being around others who are involved in activities requiring mental effort encourages a person to do similar activities on their own.

2) Physical activity. Not only do people model their mental activities after friends and associates but the research showed that when people were more socially active they also tended to be more physically active. During those times of increased physical activity their memory performance was better. This effect was not due to overall health or the social engagement but seemed to be directly related to the physical activity itself.