Affirmations aren't huge accomplishments. Instead, look for the positive things in yourself no matter how small. Often, low self-esteem is based on many small negatives. For instance, a person might focus on a small negative and blow it out of proportion. “My nose is too big!” And think that is all other people notice. Instead, “I have a nice smile which is more noticeable than my nose.” Look for positive attributes. “I am persistent.” Write these affirmations down and review them frequently. It is too easy to focus on the negative and ignore the positive.

The mistake many people make is to use general affirmations such as “I am wonderful in every way.” However, we tend to dismiss general affirmations as unbelievable. Instead, when you create an affirmation, be specific and base it on evidence. Often, even with new clients I don't know very well, I can create such affirmations. For example, “You have shown that you are persistent and hopeful because even though other therapy has failed, you keep searching for an answer. That is the evidence for your persistence.” They usually brighten up and say, “Oh! I hadn't thought of it that way!” 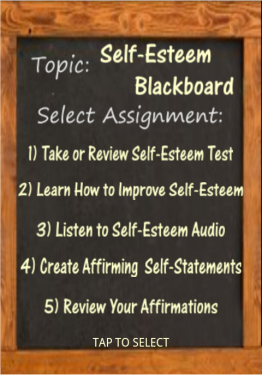 Excel At Life's Self-Esteem Blackboard app provides general affirmations only because it is addressing many different people. The idea is to take a relevant general affirmation such as “I am worthwhile. I have a lot to offer” and personalize it with specific evidence about yourself such as a list of positive qualities. The app is a nice way to do this because you are given suggestions to help you get started. In addition, you then have a record that you can easily review. However, you can do the same thing by keeping an affirmation journal.

This is a step that you can continue indefinitely. If you have a problem with low self-esteem, it is a good idea to make affirmations a part of your daily life. Sometimes people will do this for awhile but when they start to feel better they stop giving themselves affirmations. Believe me, successful people may not be using such a structured technique but they ARE giving themselves affirmations all the time! So don't stop this step just because you feel better or because it is not working quick enough. You are creating a competing pathway in the brain that is focused on the positive rather than the automatic negative pathway. Think about how much the negative pathway has been reinforced. You need to consciously and continually reinforce the positive pathway so that it becomes stronger than the negative.